Condair has a gas at BAT Southampton

Two Condair GS humidifiers were installed, each capable of delivering up to 240kg of steam per hour to two AHUs feeding a test area which needed to be kept at a constant 22°C with 60%RH ±5%. Steve Hemsley, Head of Commercial at British American Tobacco, commented, “To date the humidifiers have enabled us to maintain the desired conditions in our close conditioned environments.”

Condair GS gas-fired steam humidifiers have a high quality, compact construction with state-of-the-art safety features, a user-friendly design and a variety of flexible options which makes them simple to install and straightforward to service and maintain.

The humidifier incorporates a 360° flame encircling the burner. This maximises the thermal transfer to the heat exchanger resulting in a thermal efficiency of over 90%. The Condair GS therefore reacts very quickly to a requirement for humidification whilst minimising gas consumption and emissions. Steam output can also be consistently controlled from outputs as low as 10kg/hr.

The stainless steel heat exchanger has large flat surfaces that dislodge scale during normal operation. This scale falls to the bottom of the water tank. The large flat surfaces of the heat exchanger make it easy to remove what little scale is left behind. Also, as the heat exchanger remains mostly scale-free, the efficiency of heat transfer to the water is maximised. To further reduce scale build-up in the boiling chamber, a low volume of fresh water is continually added and high mineral content water removed. This not only decreases scale build-up but improves humidity control when compared to other gas-fired humidifiers that occasionally stop steam production and run a complete tank drain to combat scale.

Alongside the humidifiers Optisorp short evaporation steam lances were also supplied to distribute the steam inside the ducts. Made from stainless steel, giving a long service life, the OptiSorp steam distribution manifold offers evaporation distances up to four times shorter than standard steam pipes. Multiple distribution pipes provide steam across the entire duct at a very even concentration. The pipe’s outlets have tiny tubes that take the steam from the centre of the pipe where it is at its hottest and driest, assisting rapid absorption.

Back to the News overview

Talk to a tobacco humidification expert

Submit the form and we'll be in touch 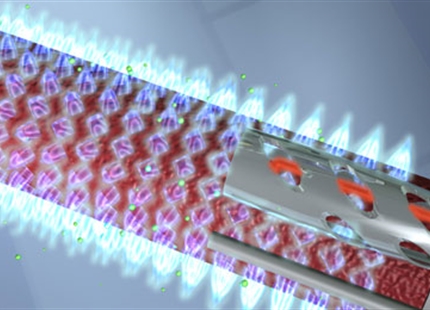 The economy of gas